While it’s a bit slow to start, frontloaded with tutorials and exposition, and generally muddled at the outset, Rage 2 shapes up into an incredibly fun time and a natural evolution of a franchise I was worried Id had written off as a dead end.

From a gameplay perspective, the combat is on point for both the in and out of car experiences.

Although Rage 2 features top-notch close-quarters combat with a variety of enemies, it’s defined by its big boss battles.

With its large open world and vast array of upgrades to earn, Rage 2 feels very much like an antidote for Far Cry fans who have overdosed on that particular style and want a new take on the large-scale shooter-RPG idea. 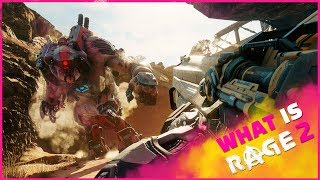 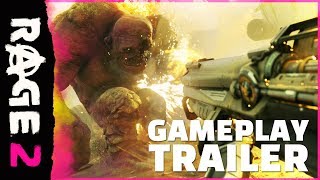 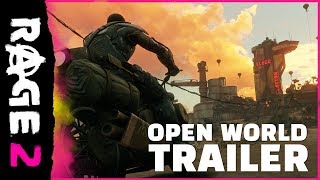 You will be plunged headfirst into a dystopian future without society, law, or order. RAGE 2 brings together two studio powerhouses-Avalanche Studios, masters of open world insanity, and id Software, creators of the first-person shooter -to deliver a carnival of carnage where you can go anywhere, shoot anything, and explode everything.

An asteroid has decimated 80% of the world's population and human numbers are declining. Humanity is now at a crossroads. Anarchic and bloodthirsty gangs are seen roaming the open roads while the tyrannical Authority attempts to rule with an iron fist. As Walker, the last Ranger on the wasteland you have lost everything and must now fight for justice. You will be fighting evil gangs in an open world to uncover the technology and tools necessary to overthrow The Authority's oppressive rule.

WELCOME TO THE SHOOTERVERSE
RAGE 2 is a dream team made possible by Avalanche Studios' open-world prowess and id Software’s shooter pedigree. It's more that a shooter and more than an open-world game. It's a shooterverse.
THE WASTELAND AWAITS
In pursuit of The Authority, you will effortlessly travel across a wide range of landscapes: from dense jungles and treacherous swamps, to deserts that are sun-scorched. The wasteland is vast, and you have the weapons to fight for every inch.
PEDAL TO THE METAL
To speed through the badlands, you can use a range of rugged, desert-ready vehicles such as monster trucks or gyrocopters. If it looks like you can drive it, you can.
THE LAST RANGER
You can bring the pain with a variety of weapons that are upgradable, deadly Nanotrite powers and Overdrive which allows you to push your guns past their mechanical limits.
FACTIONS & FOES
Fight against the evil factions seeking to take control of the wasteland. Each includes a rogue’s gallery of madmen and mutants as well as monsters thirsty for blood.

Incredible gun play and combat that is only held back by an average story and world, still a fun romp though.

How to Redeem on Bethesda